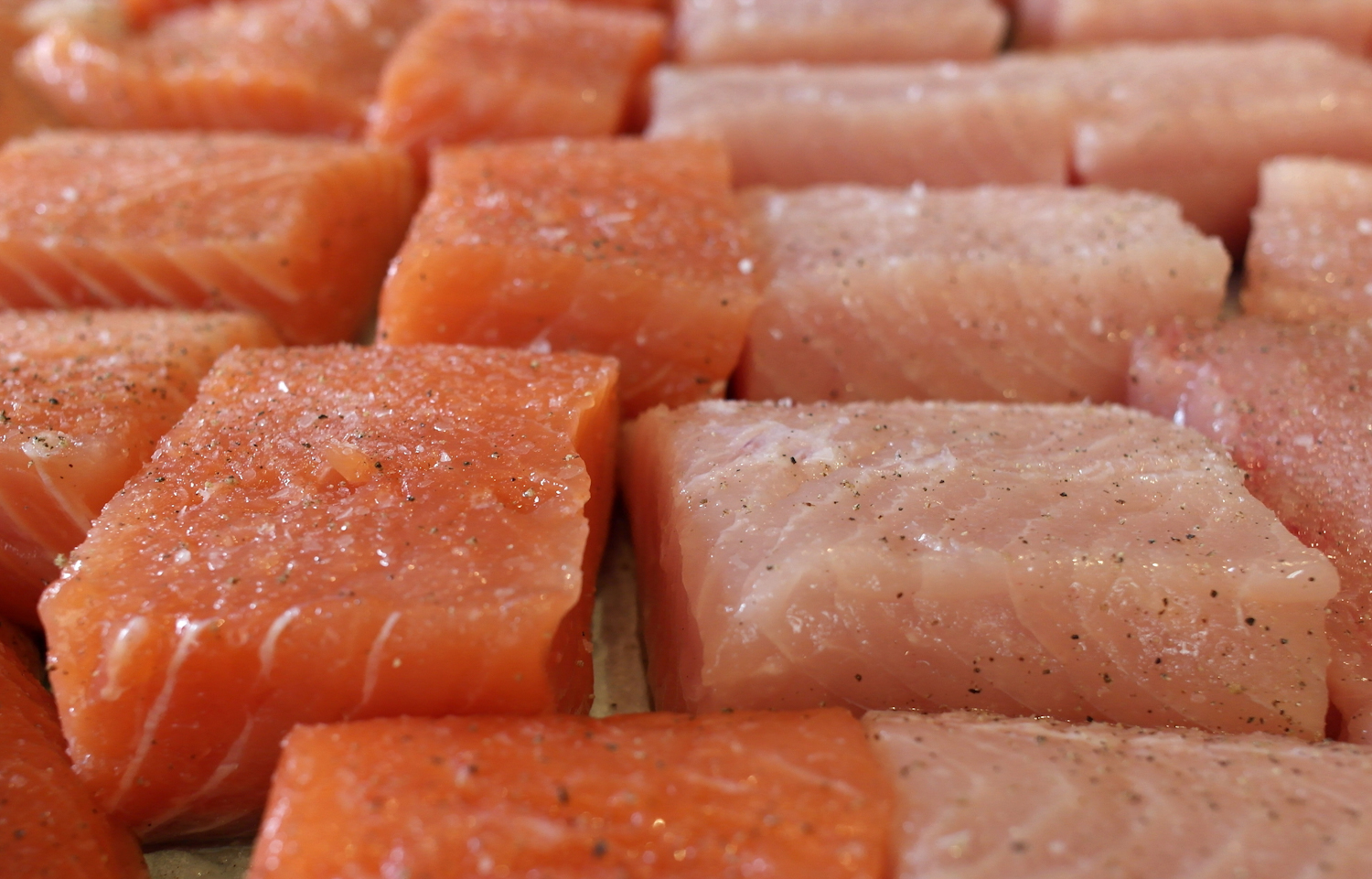 Amy Grondin has eaten a lot of salmon, and has tasted every culinary preparation from sashimi to sous-vide. But this chowder, which is Amy’s creation, is special. Of course, the flavors are extraordinary, confirmation of the superior quality of fresh, troll-caught Chinook. And it is the perfect comfort food for old salts and fishermen alike (made especially tasty with the dose of umami contributed by wakame).

Amy is a commercial fisherman during the late spring through early fall when salmon season opens from the Strait of Juan de Fuca to the Alaskan coast. When she’s not on the water, she champions sustainable food systems. She relies on salmon, both as a means to make a living and as a symbol to teach consumers about better food and better food choices. Amy considers Pacific salmon an intrinsic business partner, and as such, is a steward of these fish. “If we take care of the fish, the fish will take care of us,” she says, striking a balance “of people, profit, and planet.”

I first learned about Amy through her advocacy for a particular kind of salmon; an underwater underdog, if you will. That fish is the Washington Marbled Chinook.

Fillet a Chinook salmon (also known as king salmon) and you will most often see the coral red flesh we all expect of this fish. But once in a great while, due to an anomaly in pigmentation, a Chinook will have ivory white flesh. And sometimes, if you cut open a Chinook, especially one caught in the Salish Sea, you see yet another variation: a softly mottled pink color, an intermixing of the typical coral red pigmentation with the rare white. This marbled salmon is special, especially when you consider where it is found.

The range of all Chinook is extensive, reaching from San Francisco north to Alaska, along the Aleutian Islands and across the Bering Sea, down along the eastern Siberian coast and on to Hokkaido, Japan. But marbled Chinook occurs predominantly in the Washington and southwestern British Columbia fisheries. Biologists still don’t understand the genetics behind it, but research to date shows that marbled Chinook are spawned in the tributaries of the lower Fraser River in British Columbia: the Harrison, Vedder, and Chilliwack Rivers. It is an unusually precise location, especially for a species with such a broad range, making marbled Chinook the only readily identifiable, regionally distinct salmon of any species, king or otherwise. This creature is a remarkable example of a place-specific food.

As special as marbled Chinook is, it lacks the traditions, histories, and reverence we see tied to other heritage food animals. As such it isn’t given a fair shake in the market. It is an anomaly too obscure, maybe not to fishermen like Amy, but to diners, chefs, and even fishmongers. Consumers expect salmon to be red. Any salmon that is not that familiar salmon color, even if it is fresh and firm and exhibits an appetizing mottled pink hue, must be inferior, we think. “If we could pull a king salmon out of the water, readily identify it as red, white or marbled, and return the less valuable, non-red specimens safely back to the sea, it wouldn’t be much of a concern,” Amy explained to me. “But you have to kill a Chinook to know what you have caught.”

Red, white and marbled Chinook are all the same species of fish, Oncorhynchus tshawytscha. The outward appearance of marbled Chinook is the same as any other Chinook—a bluish-green back speckled with black spots, bright silver flanks, a white belly and iridescent tail, black lips and gums. Only once the fish is landed and cut open will the fisherman know the color of its meat, which spawned a highly unethical and illegal practice among the region’s fishermen: high grading.

High grading is the commercial harvesting of large quantities of product—like timber or minerals or fish—and keeping only the best and most marketable goods, discarding the rest. It is an environmentally destructive practice, especially deplorable in Chinook fishing, as the value of the goods aren’t tied to the vigor or quality of the fish, rather the whim of a trend that prizes one flesh color over another. Such has been the case with marbled Chinook.

So, imagine this: You’re a salmon fisherman. Chinook is the largest of the Pacific salmonids and has the highest fat content, so it consequently fetches the best prices—about $35 a pound at retail. But some years, for whatever reason, almost half of your Chinook catch is marbled, and the most you can get for this fish is 35-cents a pound; 1/10th the value of a typical Chinook. To ensure sustainability, the Washington Department of Fish and Game sets a limit on how many salmon you can remove from the sea to sell. What do you do? If you’re unscrupulous, you throw all the marbled Chinook (which are now dead) back into the water, re-bait your hooks, and hope to catch some high-value red Chinook. It is a waste of delicious, nutritious food and puts the health of fish stocks in peril.

Some Washington troll fishermen had a different strategy. “What if we could prove to wholesalers and distributors, fishmongers and chefs, that marbled Chinook is every bit as unctuous and flavorful as a red king?” they thought. “What if we marketed the marbled salmon as ‘The Fisherman’s Favorite,’ because we know just how special these fish are? There would be little reason to high grade Chinook if all of them commanded a good price.” Amy had found her calling.

It has been two decades of tireless championing by Amy and a handful of her colleagues, and the efforts are paying off. Marbled Chinook still doesn’t fetch the same price as red, but the gap has closed considerably. “It’s been a tremendous success in terms of increased awareness and publicity and ex-vessel price,” Amy says. Still, she recognizes the advocacy must continue.

Amy’s dish is delicious. But one of my favorite parts of her chowder recipe is the preparation…something I rarely say. There is something sublime about cubes of red Chinook nestled against cubes of marbled salmon, lightly adorned with sea salt and a sprinkling of black pepper. You almost won’t want to cook the fish at all, it looks so tantalizing raw, sitting there on the cutting board.

This is more than a simple fish chowder to Amy Grondin. This dish, named after her previous boat, F/V Duna, is dear because it was the meal she shared with fellow captains during a rainy day at sea; a delicious, hot, spirit-lifting bowl of soup that sparked an auspicious start to the summer fishing season. This meal gives Amy a deserved sense of pride, because it is, as she put it, “the recipe that fed the crews from five fishing boats.”

In a large stockpot over medium heat, sauté the bacon until the fat is rendered but the meat is not too crispy. Add the onion and celery, stirring occasionally until the vegetables are just soft, about 5 minutes.

Add the garlic, bay leaves, dill and thyme, and sauté until fragrant, about 1 minute. Now add the carrots and fish stock, simmering until the carrots soften slightly. Scrape the bottom of the pot occasionally to loosen any bacon or vegetable bits.

Next add the potatoes, corn and cream (or evaporated milk) and continue to simmer until the spuds are just slightly soft. Remember, keep stirring so nothing sticks to the bottom of the pot.

Once the potatoes are soft, adjust the heat to keep the broth steaming hot but below a boil. Now add the cubes of salmon and dried wakame. Give the chowder a gentle yet complete stir to submerge the fish and distribute the wakame throughout. Simmer until the fish is barely cooked throughout (check at 5 minutes). Remember the fish will continue to cook in the hot broth even when the pot is off the stove, so be careful not to overcook the fish or it will be chewy.

FISHERMAN’S TIP: Amy says “You can make this chowder a day ahead of time if you wish. Stop just before you add the fish then cool and refrigerate the chowder. One hour before you wish to serve the chowder, gently heat the soup back up to a steamy simmer and add the raw fish and dried seaweed. Follow the recipe from that point onwards.”