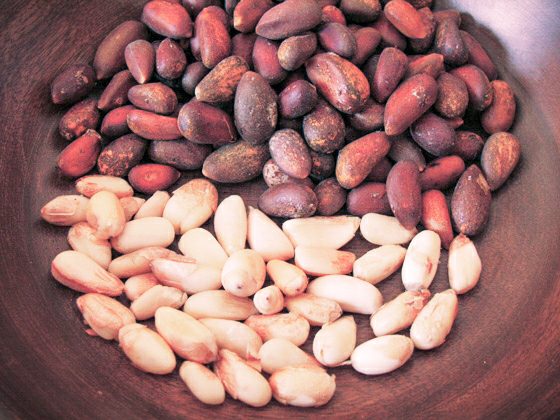 Most associate pine nuts with Italian-inspired cuisine. Pine nuts are a principal ingredient in pesto, and are often sprinkled over a variety of pasta dishes. But pine nuts have been an important crop in the Four Corners region of the United States for thousands of years.

Of the 115 species of pine trees known to botanists, only about 20 produce seeds large enough to be viable human food. And in the United States, the principal pine nut seen in the stores is our very own pinyon (or piñon).

Pinyons grow in the high deserts of the Southwest, principally Colorado, Utah, Arizona and New Mexico. Because of politics and commercial agreements, almost all the pinyons for commercial consumption are harvested by Native Americans, particularly Shosone, Paiute, Hopi, and Uto-Aztecan peoples.

Typically, you will find pinyons already shelled. One day, I stumbled upon pinyons en-shell at a small produce stand in California. I didn’t recognize them at first, and the vendor explained they were recently dried and ready for roasting.

I took these home, rinsed them thoroughly, and then laid them in a single layer on a baking sheet. I roasted them in a 350 degree for about 20 minutes, shaking the pan every 7 minutes or so.

Shelling pinyons are a bit tricky. But I found if you lay them between terry cloth towels and use a rolling pin with gentle pressure to crack the shells, the task is easier. It is still a lot of work, however.

But the flavor is worth the effort. Roasting the pinyons in the shell imparts that unmistakable pine flavor to the nuts. I’ve never really tasted much of a pine flavor from commercially shelled pinyons. But with these, it was certainly present. It isn’t overly piney; quite subtle. But that added pine flavor gives a welcome complexity to pinyons. Which for me, increases their yum factor two-fold.