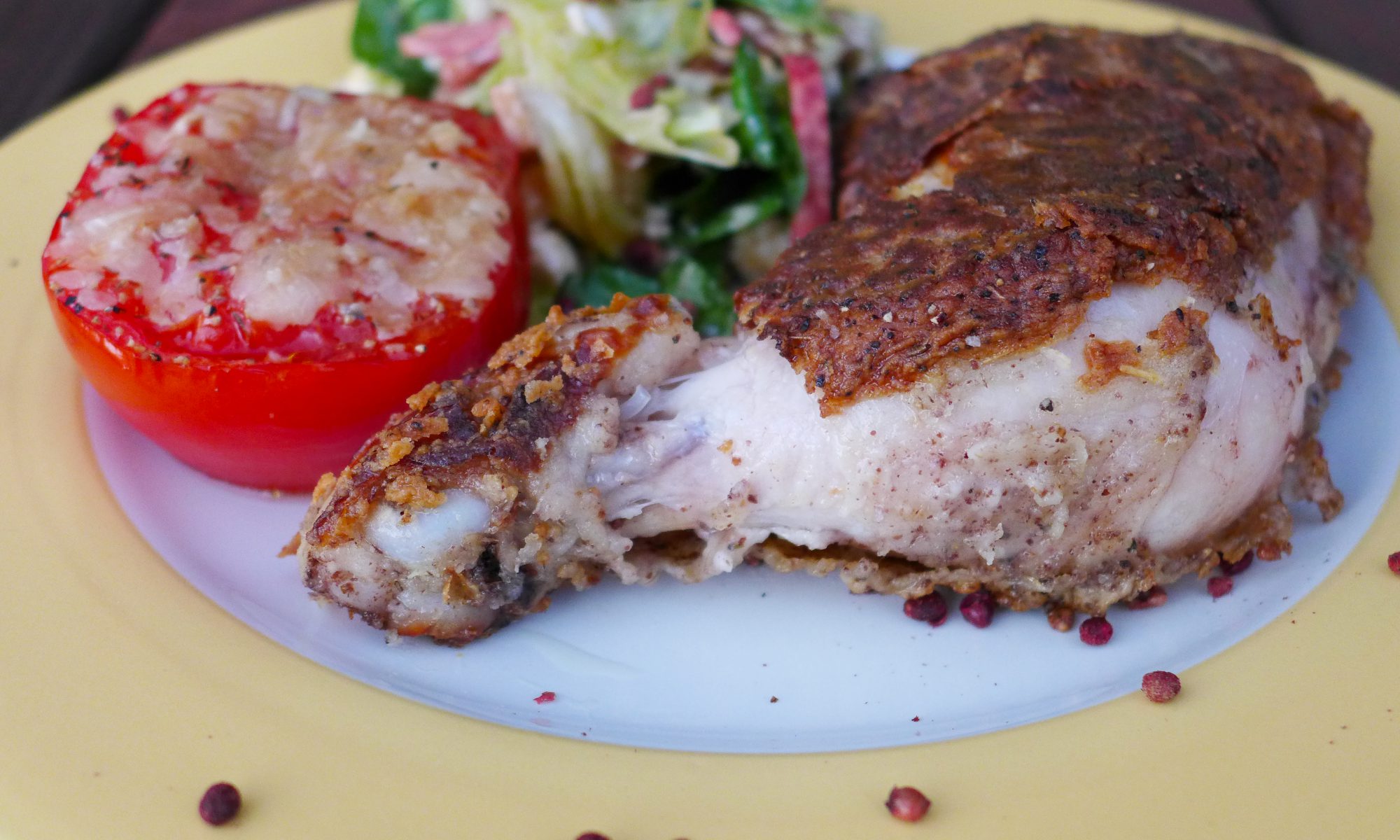 Sumac, though native, can be a tenacious weed. Smooth sumac (Rhus glabra), for example, has set root in forty-eight states and almost all the Canadian provinces. Staghorn sumac (Rhus typhina) is not quite as footloose, remaining (mostly) rooted in northern Appalachia, the Great Lakes, and a large pocket in and around the Great Smoky Mountains. But even staghorn sumac, when given an opportunity, freely self-sows. Though many curse sumac, the little red berries have a lemony zing that adds freshness, color, and brightness to all sorts of dishes, and enlivens eggs, potatoes, meat, fish, and pasta.

This recipe is inspired by Tama Matsuoka Wong’s za’atar chicken nuggets, from her book Foraged Flavor. Tama is a professional forager, weed eater, and meadow doctor, and she turned me onto the sprightly flavor of staghorn sumac.

Za’atar is a popular Middle Eastern spice blend and condiment, often made with dried herbs, sesame seed, salt, and sumac. Tama makes a unique za’atar blend from just three ingredients: staghorn sumac, sesame seeds, and thyme. Try her recipe, or the one below, or create your own spice blend pairing sumac with white pepper, perhaps. Staghorn sumac is incredibly versatile; you really can’t go wrong.

You’ll have to make the sumac spice in the late summer or early fall, when the berries are ripest. If you harvest about 8 large berry clusters, you should have enough to make about 2 cups of spice.

Begin by breaking apart the berry clusters and removing the twiggy core. Place the berries in a sieve and quickly wash with cold water, but don’t overdo it, as the water will wash away the flavor and color. Drain and then place the berries on paper towels to absorb any excess water.

Meanwhile, turn on the oven to its lowest setting (about 150°F). Line a baking sheet with parchment paper and spread the sumac berries evenly in a single layer. Place the baking sheet in the warmed oven for about 3 hours, until the berries are dry. Grind the berries in a spice grinder, and then sift through a fine-meshed sieve to catch any remaining twigs or seeds. Store in an airtight container.

In a large cast iron skillet, heat 1 inch of oil until it reads 350°F on a thermometer. Working in batches, place a few chicken pieces in the hot oil and fry for 6 to 8 minutes. Turn each piece over, then cover the skillet and cook an additional 6 minutes, or until each piece of chicken registers 165-degrees on an instant read meat thermometer. Remove chicken pieces and drain on paper towels. Season with more salt if necessary and serve.