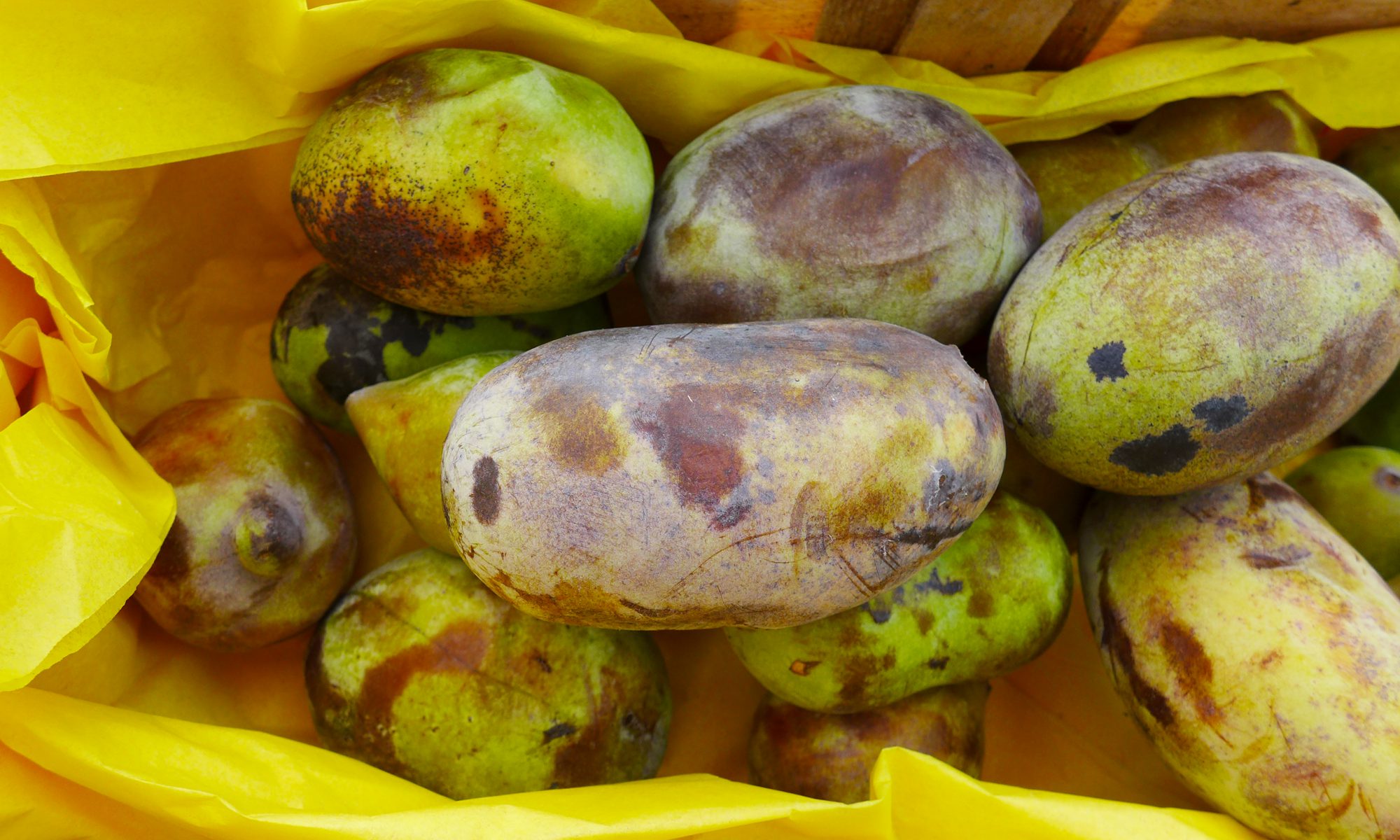 I’ll say one thing, Chmiel throws a good party. Chris started the pawpaw festival in 1999, and I flew out from California to help celebrate its fifteenth year. On the plane, I was doubtful a largely forgotten fruit could sustain the interest of folks over three days in the waning Midwestern summer. But I was obviously unprepared for how popular Chris’s festival has become.

Part of the festival’s allure was undoubtedly the scenery. Set in the Appalachian foothills, the festival site comprises sprawling lawns with the gentlest of undulations, running right up to the banks of Lake Snowden. The space felt like a large yet cozy outdoor room, enclosed by walls of rising hills and verdant forest. Thousands drove to Lake Snowden every day of that festival to enjoy live music, taste dozens of dishes showcasing pawpaw, sample pawpaw beer, and ogle the myriad pawpaw-themed crafts—all set within the sylvan splendor of Appalachia.

Typical of summer festivals, there was plenty of tie-dye and patchouli, dogs and dreads. But I also found chefs, naturalists, distillers, farmers, and scientists here, all eager to reintroduce pawpaw to American cuisine. At first it was hard for me to grasp that this rather uncomely fruit, even with its knockout flavor, could ignite such passion in so many. But then again, I, too, experienced the cult-like appeal of the pawpaw. These aficionados, though different in vocation, were united in mission: the pleasures of the pawpaw should be shared with all Americans, made available in supermarkets across the country.

But they also understood why that couldn’t be.

We’ve all bemoaned the flavorless supermarket tomato—or strawberry, plum, peach, or any number of fruits, for that matter. Supermarket produce has to meet stringent criteria to make the grade, but flavor isn’t one of those measures. Supermarkets prize appearance and shelf life above all else. And each particular fruit or vegetable should be uniform in its beauty. Ever notice how all the supermarket carrots have a remarkably similar length, caliber, and complexion? Ever notice how many carrots from your garden exhibit that same uniformity?

To guarantee good looks, supermarkets demand produce that can withstand the bumps and jostles of commercial agriculture. Tender hands gingerly plucking perfectly ripe peaches and gently placing them in towel-lined wicker baskets is what we like to think happens out in the fields. In reality, the hands must work quickly, feverishly tossing fruit into large bins towed by tractors. After it arrives at the processing plant, huge, complex machinery wash the fruit before it is dropped onto a maze of conveyor belts for sorting and packing. Forklifts grab crates of the produce and load them onto semis, which will then truck the produce some 1,500 miles, on average, to the terminal market. There the crates of fruit are unloaded by more forklifts, separated, and repackaged for delivery to grocery stores.

Needless to say, that soft, perfectly ripe peach wouldn’t make it out of the fields before being squished to a pulpy mess. So peaches are picked before they are completely ripe, when the flesh is still quite firm. For added insurance, the supermarket’s preferred varieties of peaches—and tomatoes, plums, and strawberries—have been bred for thicker skins, tougher flesh, and boxier shapes, so that they pack tighter and bruise less, arriving at the supermarket looking glossy and fabulous. Flavor is an afterthought.

But the flavorful pawpaw is thin-skinned and bruises easily. Its complexion is anything but handsome and uniform. It also has a volatile shelf life that gives grocery managers fits. Pawpaws are inedible unless fully ripe, and they will spoil in just two or three days once they are ripe. If these fruits were better suited to the demands of commercial packing, distribution, and sales, pawpaws wouldn’t be so obscure—we would see them in the produce aisle, side by side with all the other popular seasonal fruits. But the sad reality is that the pawpaw will never be as pretty as the flavorless tomato. Which is why grocery chains pooh-pooh the pawpaw.

Still, Chris has had some commercial success with his fruit. One product Chris pioneered is frozen pawpaw pulp. He takes fresh, tree-ripened fruit and runs it through a food mill, separating the creamy flesh from the skins and seeds. Freezing fresh pawpaw pulp creates a transportable product with real longevity. Indeed, in what might be the pawpaw’s greatest commercial achievement in the history of the fruit, Chris persuaded Ohio-based Kroger—the nation’s largest grocery chain—to stock his pawpaw pulp in their freezer section, the one place in a supermarket where the spoil-prone pawpaw can garner deserved respect.

Chris also uses pawpaw pulp as the flavor foundation for a variety of value-added foodstuffs. Jams, chutneys, and relishes are fun ways to enjoy the pawpaw while extending shelf life and giving the fruit needed market appeal. Chris’s most popular delight—at least among kids—are his pawpaw pops. By adding 100 percent fruit juice from mangoes, cherries, strawberries, or pomegranate to pawpaw pulp, then freezing the concoction in slender plastic tubes, children and grownups alike indulge guilt-free—because these are as natural and healthful as any frozen, prepackaged treat gets.

The other obstacle to the pawpaw’s prominence is availability. Even though the pawpaw cognoscenti comprise a small group, demand for fresh pawpaw exceeds supply. Restaurants, bars, and creameries in the eastern United States are increasingly featuring pawpaw creations on their menus, but the Appalachian wilderness produces only so many fruits, and most of those are inaccessible to all but the most experienced hikers. If folks like Chris are to meet current demand and increase awareness among the general public, the wild pawpaw will have to be domesticated. Many of the seminars I attended at the festival focused on this very subject, but called attention to the dearth of information on pawpaw cultivation and breeding. The message I heard loud and clear was that if we are to be successful in getting pawpaws to the people, we have to better understand pawpaw ecology.

Chris led one of the educational seminars and judging by the size of the crowd, his presentation could have doubled as the keynote address. After all these years, Chris still displays youthful exuberance for the fruit. And his pawpaw insights doubled as a compelling argument for a new kind of farming—one that calls on the work of a whole host of plant and animal species. Lepidopterists should be especially keen on the pawpaw. It seems pawpaw is the only host plant for the native zebra swallowtail, an exquisitely beautiful and rare butterfly. (The zebra swallowtail is the state butterfly of Tennessee, a state with numerous pawpaw patches.)

I found Chris’s lesson on pawpaw pollination the most interesting. Of course, plants need pollinators to fruit, but bees don’t like pawpaws. The flowers, which are a captivating shade of maroon and have a certain orchid shape about them, smell awful. And we all know what bug is attracted to the fetid. Pawpaw is not only the largest indigenous fruit of the United States, but the largest fruit in the world pollinated solely by flies.

If you’re a pawpaw enthusiast interested in cultivating and breeding pawpaws, how do you get your trees to produce more fruit? Attract more flies, for starters. And how might you attract more flies? “Well, flies like dung,” Chris explains, “and animals are great at producing that shit.”

Chris says scat from any animal will do, but he prefers goats. True to his integrated approach to food production, Chris explained how raising goats not only increases his yield of saleable pawpaws but also helps diversify his business.

If you know the American folk song “Way Down Yonder in the Paw-Paw Patch,” you’ll recall that pawpaws are not plucked from the tree. Rather, you pick up pawpaws (and put ’em in your pocket). When pawpaws are ripe and ready to eat, they drop from the tree. So Chris encourages weeds in his pawpaw patch, to cushion the fall. But the weeds can quickly run amok, and maintaining a weed patch is more time-consuming and less profitable than maintaining just a pawpaw patch. So Chris enlists the help of goats. Goats love weeds but despise the flavor of pawpaw. The goats also give Chris milk, which he uses to craft a variety of artisan cheeses, including a raw milk gouda. So, in near-perfect symbiosis, the weeds keep the soft, thin-skinned pawpaws from landing with a squish, the goats keep the weeds in check, the scat fertilizes the pawpaw trees while attracting flies (er, I mean “pollinators”), Chris gets more pawpaws, and he has a sustainable source of fresh milk for his cheese division.

I came away from Chris’s seminar with a deep appreciation for species interconnectedness and biodiversity, particularly with regard to food and how it is produced. At the end of the afternoon, as I walked through the festival grounds on my way to the car, I spotted a young boy eating an ear of corn while his sister sat next to him, tasting her first pawpaw. Each held in their hands a symbol of food production in America. After living in Iowa for many years, corn has come to symbolize for me corporate agriculture, or what many colloquially call Big Ag. Species interconnectedness and biodiversity are not spoken by Big Ag. On the contrary, in the world of corporate agriculture, monocultures rule, and corn is king.

The little girl held the symbol of Chris’s brand of food production—integrated agriculture. Here, species interconnectedness and biodiversity drip from the tongue like a pawpaw popsicle on a hot summer day.